New findings compiled by Mercer project an impending 1.9 million UK workforce shortage by 2025 if demand for workers continues to increase at the same rate as the last ten years. It has been 8 months since we launched the Mercer Workforce Monitor to examine the UK population and workforce in a pre- and post-Brexit world and understand related business impacts. Since then, our discussions with clients have quickly gravitated to the core workforce issue that cannot be ignored: regardless of Brexit and in spite of automation, the UK is facing unprecedented workforce shortage.

How can UK employers respond to this shortfall while nurturing a thriving workforce in an environment characterised by uncertainty and huge disruption? They can take action through five lines of defence: creating a compelling employee value proposition, build and retain the workforce needed; diversifying their talent pool; investing in sustainable automation and productivity enhancements; moving and relocating work; and regrouping and reviewing their business strategy through the lens of people.

Our new Workforce Monitor November 2018 report, titled Diversification: Is There a N.E.E.T.* Solution to the Workforce Crisis?, looks more closely at that second line of defence: diversifying the talent pool.

* Not in Employment, Education and Training 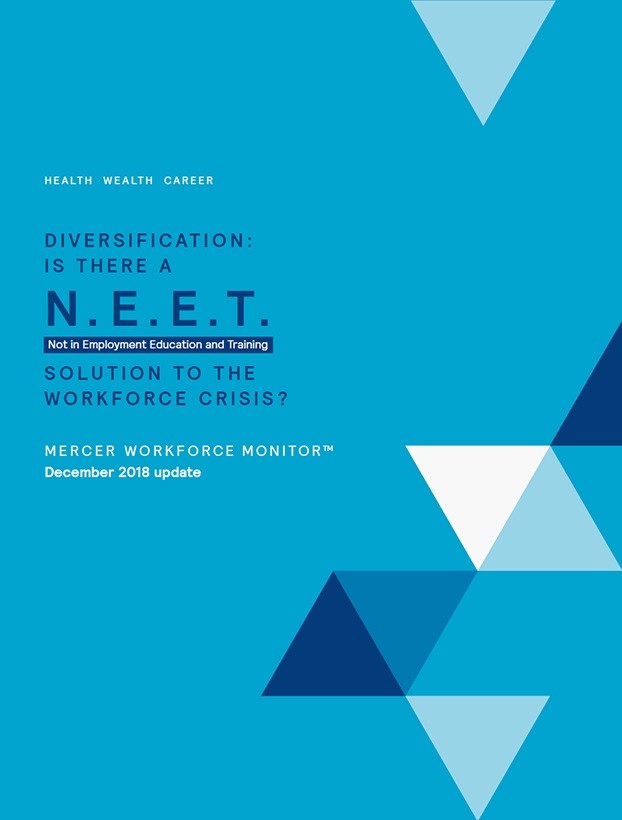 Key findings from the November 2018 report:

1. The UK will have a projected 1.9 million workforce shortage by 2025 if current trends persist.

If demand for workers continues to increase at the same rate as in the last 10 years, our figures project an impending 1.9 million UK workforce shortage by 2025. The shortfall is compounded by a dramatic decline in the number of foreign-born workers from Q3 2017 to Q3 2018, with a fall of 93,000 EU-born workers and 38,000 non-EU born workers in the UK.

This is the fastest rate of decline since records began in 1997 as the impact of the Brexit vote flows through.

Underpinning our analysis is a post-Brexit net migration assumption of 100,000 per year. This assumption could well turn out to be optimistic, with net EU migration having fallen by 115,000 to 74,000 in the last two years and an ageing EU demographic making migration increasingly less common.

2. It’s not all bad news: companies can largely meet their recruiting needs by attracting more older workers, people with disabilities and women into the workforce.

Our detailed analysis of untapped UK talent pools reveals that by implementing measures to tap non-traditional labour sources and embrace diversity, businesses can plug the gap. To do this, employers must fundamentally change their mindset and establish a strategy for recruitment and retention that’s fit for this new age.

Our research uncovers significant untapped resources that could help employers attract almost 1.8 million workers by 2025 to meet most of the shortfall.

3. Applying a Mercer framework can help companies reduce their over-reliance on traditional talent pools and foster a truly inclusive culture.

The second line of defence blows up preconceived notions of the “minimum requirements of the job” and allows organisations to consider carefully how to create a deal, an environment and a job that meet the full range of different employees’ needs by addressing the following.

We are here to help

Contact us if you are looking for stronger outcomes and building thriving organisations, Mercer can help you in the following areas: