What Are Pension Funds Focussing On?

After gathering information from nearly 1,100 institutional investors across 14 countries, reflecting total assets of around €930 billion, Mercer is proud to present our 2016 European Asset Allocation Survey!

2015 brought political uncertainty, further unconventional policy from central banks, and bouts of market weakness, and 2016 looks to be characterised by more of the same. The sell-off in equity markets in August 2015 was repeated early in the new year; Japan has followed the Eurozone into negative interest rate territory; and the potential for “Grexit” has given way to the possibility of “Brexit”. Several 2015 elections in Europe returned equivocal results (think of Spain), and this year promises a US election like no other. 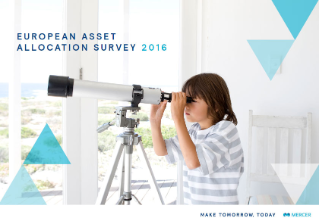 “It is encouraging to see institutional investors taking a long-term view in relation to emerging markets, in marked contrast to the behaviour of retail investors since the taper tantrum in 2013. We continue to advocate exposure to emerging markets as part of a well-diversified growth portfolio.”

Infographic
View our infographic on the key findings
Read More

Take a look back with the 2015 European Asset Allocation Survey.

Please provide your details below.