Mercer’s Pensions Risk Survey data shows that the accounting deficit of defined benefit (DB) pension schemes for the UK’s 350 largest listed companies increased from £45bn at the end of February to £55bn by the end of March. Declining corporate bond yields prompted an increase in liabilities from £811bn to £847bn and were only partially offset by a fall in market implied inflation. Asset values increased from £766 billion to £792 billion over the period.
Maria Johannessen, Corporate Consulting Leader and Partner at Mercer, said: “The pension gap has widened for the second consecutive month, despite a £26 billion increase in asset values, and has now reached its highest month-end level since October 2017 having doubled over the past year alone. A slight fall in medium-term market implied inflation to 3.45% was unable to mitigate the decline in corporate bond yields which led to a £36 billion increase in liabilities.”
Le Roy van Zyl, a strategic advisor and Partner at Mercer, added: “With the political uncertainty in the UK set to continue and evidence of a slowdown in the global economy mounting, it is important for scheme trustees and sponsors to remain vigilant and prioritise risk management. This must be in context of the added emphasis from The Pensions Regulator on managing to a clear long term objective. The UK’s future relationship with the EU is no clearer, and we can expect funding level volatility to persist until greater clarity is found.”
Mercer’s data relates to about 50% of all UK pension scheme liabilities and analyses pension deficits calculated using the approach companies have to adopt for their corporate accounts. The data underlying the survey is refreshed as companies report their year-end accounts. Other measures are also relevant for trustees and employers considering their risk exposure. But data published by the Pensions Regulator and elsewhere tells a similar story.
Notes to Editors
Mercer estimates the aggregate combined funded ratio of plans operated by FTSE350 companies on a monthly basis. This is based on projections of their reported financial statements adjusted from each company’s financial year end in line with financial indices. This includes UK domestic funded and unfunded plans and all non-domestic plans. The estimated aggregate value of pension plan assets of the FTSE350 companies at 31 December 2018 was £747 billion, compared with estimated aggregate liabilities of £788 billion. Allowing for changes in financial markets through to 29 March 2019, changes to the FTSE350 constituents, and newly released financial disclosures, the estimated aggregate assets were £792 billion, compared with the estimated value of the aggregate liabilities of £847 billion. 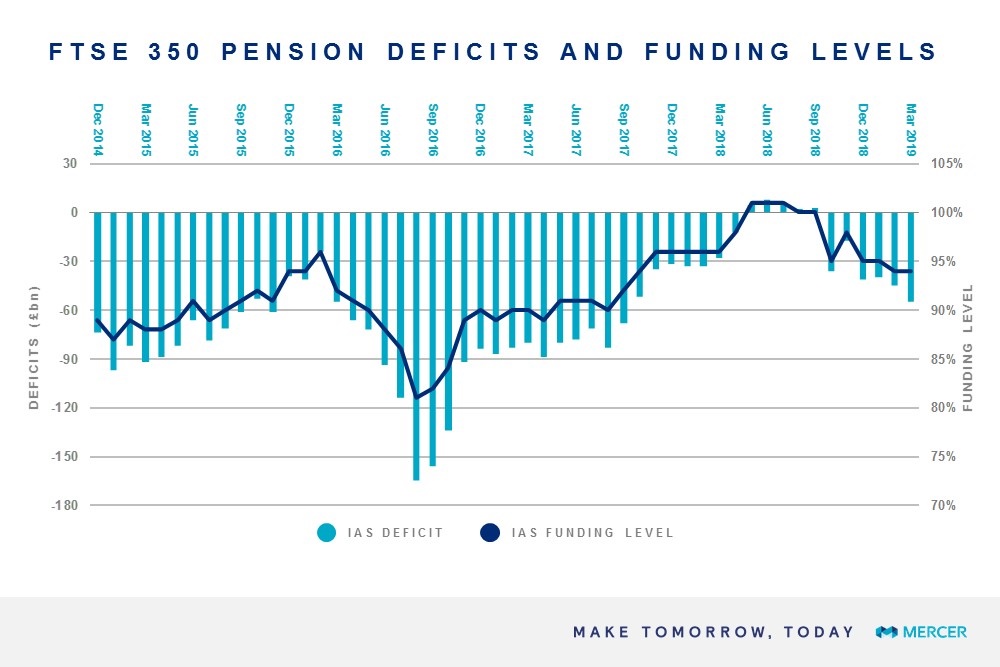 Mercer delivers advice and technology-driven solutions that help organisations meet the health, wealth and career needs of a changing workforce. Mercer’s more than 23,000 employees are based in 44 countries and the firm operates in over 130 countries. Mercer is a wholly owned subsidiary of Marsh & McLennan Companies (NYSE: MMC), the leading global professional services firm in the areas of risk, strategy and people. With nearly 65,000 colleagues and annual revenue over $14 billion, through its market-leading companies including Marsh, Guy Carpenter and Oliver Wyman, Marsh & McLennan helps clients navigate an increasingly dynamic and complex environment. For more information, visit www.mercer.com. Follow Mercer on Twitter @Mercer. In the UK, Mercer Limited is authorised and regulated by the Financial Conduct Authority.